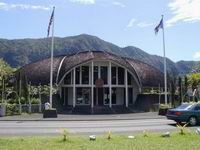 Samoans traditionally have common ownership of land and about ninety percent of the land in American Samoa is collectively or communally owned. Local farmers raise vegetables, taro, yams, and copra; which is dried coconut. Tropical fruits such as bananas, coconuts, breadfruit, pineapples, and papayas are plentiful. There is also a small amount of diary farming. The federal government employs about one-third of the workforce in American Samoa. Tuna fishing and procession are the major industries. Canned tuna is the territory’s most important export. Another one-third of the working people have jobs in the canneries. The remainders of American Samoa’s people work in retail and service industries. The United States is the principal trading partner for American Samoa. Products exported from the territory to the states are admitted duty-free. This disturbs many people because federal minimum-wage laws are not recognized in the territory.

American Samoa is heavily dependant on the United States government for financial aid. In the 1960’s the government tried to boost the economy by building roads, housing, transportation facilities and school and other public buildings. Some Samoan leaders felt that all this activity resulted in too much dependency on welfare and other government assistance. Despite economic modernization, the traditional land tenure system remains unchanged. Agricultural production has never been a significant part of the territory’s economy, but most families continue to plant and work their farms.

The American Samoan government funds public health care, although it has begun to institute some costs for standard treatment and hospital stays. The hospital in Pago Pago recently completed major renovations and updates to their facilities and got new equipment. Similar construction and renovation projects are also in progress for medical dispensaries. The most consistent problem in the delivery of health care medicines is the recruitment of licensed and specialized medical professionals from the United States.

Education is based on the United States school system and is mandatory for all students through high school. Classes are taught in English except in early elementary grades. Samoan culture classes, once an important part of the curriculum, no longer maintains the importance they once had. The Department of Education has made significant strides in providing computers and computer training ion the high schools with plans to expand this program to the elementary school. They also received an annual allocation from the territorial legislature to fund scholarships for qualifying high school seniors to attend college in Hawaii and in the United States.