American Samoa is an unincorporated territory of the United States in the central Pacific Ocean. These islands in the Pacific are divided into groups. The eastern Samoan island of Tutuila, Aunuu and Rose, along with three islands Tau, Olosega, and Ofu of the Manua group and Swains Islands make up the total American Samoan territory. Their total area is approximately seventy seven square miles. 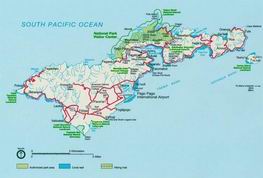 The American Samoa capital is Pago Pago, (pronounced Pahn-go, Pahn-go) which is on the Island of Tutuila. The population is estimated at nearly 600,000 people for the American Samoa territories.

Tutuila accounts for more than two-thirds of the total area and is the largest island of American Samoa. It’s located in the westernmost region of the island group and is less than one hundred miles from the Western Samoan island of Upolu. The Naua island group which is about sixty miles east of the Capital city is the second largest area; Tau is the largest of the three islands in this group. The remaining islands are quite small. Aunuu is located off the southeastern tip of Tutila and Rose Island is a privately owned coral atoll some two hundred and eighty miles northwest of Tutila.

Except for the atolls of Swains and Rose, the islands are rocky. They were formed from the remains of extinct volcanoes. Central mountain ranges are prominent over the landscapes of Tutuila and the islands of Manua. The highest peak of Tutuila is Mount Matafao at two thousand, one hundred and forty one feet high, but the most popular and well known Mount is Mount Pioa which is only one thousand, eight hundred and forty seven feet. This Mount is known as the “rainmaker” because of its frequent cloud cover. Tau is a cone-shaped island rising to more than three thousand feet at Lata Mountain, the highest peak in the territory. Low-lying Swains Island rises to only twenty feet above sea level.

The islands are characteristically surrounded by coral reefs, which in some cases form barriers that create lagoons. The mountain ranges and the coral reefs tend to limit the width of the coastal plains in most areas. Most of the island’s streams do not reach the ocean, instead they seep through the porous basalt rocks that form the islands.

The tropical climate is moderated by ocean trade winds and frequent rains. Pago Pago receives more than one hundred and twenty inches f rain each year, the majority of which falls between November and March. Temperatures are constant throughout the year as daily lows average about sixty eight Fahrenheit and afternoon high at about ninety degrees Fahrenheit. The humidity is almost always high.

About seventy percent of the land area is forest with tall ferns and trees such as the Barringtonia asiatica, the breadfruit tree. The pandanus and coconut trees are also in the American Samoa forests. More than thirty species of birds have been observed, including parrots, doves, wild duck and the tooth-billed pigeon, which is only found in American Samoa.

Because about seventy percent of American Samoa is bush, growing on the slopes of volcanic mountains, these animals are well protected. The coral reefs that surround much of the islands have a delightful and inviting South Seas climate.

There is a National Park of American Samoa that lies in the territory. The park was established primarily to protect the area’s tropical rain forest on the islands of Tutuila and Tau. The rain forest, as stated earlier is home to many kinds of plants and animals including two species of large bats called the flying foxes. A white sand beach and coral reef on the island of Ofu are also part of the national Park in American Samoa. In certain areas of the park, the people continue to practice traditional methods of farming and reef fishing. Established in 1988, the National Park of America Samoa is over nine thousand acres and would be a tourist attraction with hiking, scuba diving and snorkeling once the transportation accommodates these types of travelers.

Those who live in the Pacific Islands of American Samoa enjoy the constant temperatures and spend much time in the outdoors hunting, fishing and basket weaving. The water is clear and warm, making it a home to many species of fish and marine life not seen in the United States coastal waters. While the traditional Samoans way of life is exercised by many, the modernization and influence of the Western cultures continue to permeate the islands. Many high school students leave to train in the Hawiian Isalnds or in the United States. This disappoints many on the islands because the elders feel their way of life is coming to extinction.

The strong hurricanes that come to the islands between January and March have caused much devastation over the years. The Pacific Islanders are prepared for these gales and have spent much of their time rebuilding what could not be saved. While a beautiful place to visit, the Pacific Islands have their share of inclement weather.